Joe Wilkins and the Big Dry 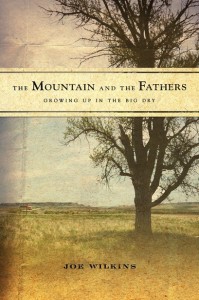 Award-winning author Joe Wilkins will visit Elk River Books to read from his memoir, The Mountain and the Fathers: Growing up on the Big Dry, on Thursday, October 18 at 7 p.m.

Wilkins, a poet, essayist and short story-teller, takes on the edges of American culture in his memoir, The Mountain and The Fathers, set in the Big Dry landscape north of the Bull Mountains in eastern Montana where he grew up. In one interview, Wilkins says his intention was to characterize the place in a way that helps readers understand the isolation and poverty of marginal communities, as well as put accurate, honest words to a piece of land that still looms large in his consciousness:

“I came from a place where the people ranched and farmed and spent a lot of time out on the land. If we were going to have fun, we’d go ride four-wheelers or go swim in the river. We seldom had other things to do, inside things to do,” he says. “The land was important to me. And that seeped in. It’s never left. When I left Montana, it stayed with me, and it still stays with me. When I travel, when I see something that affects me deeply, that inspires and moves me about the new places, Montana is still there.”

According to the book cover, “Wilkins uses his own story and those of the young boys and men growing up around him to examine the violence, confusion, and rural poverty found in this distinctly American landscape. Ultimately, these lives put forth a new examination of myth and manhood in the American west and cast a journalistic eye on how young men seek to transcend their surroundings in the search for a better life. Rather than dwell on grief or ruin, Wilkins’ memoir posits that it is our stories that sustain us.”

Currently a writing teacher at Waldorf College in Iowa, Wilkins has also published two collection of poems, and been honored with a whole host of awards including the Richard J. Margolis Award of the Blue Mountain Center, given to “a promising new journalist or essayist whose work combines warmth, humor, wisdom and concern with social justice.”

Wilkins’ reading is free, open to the public, and will be followed by a signing.