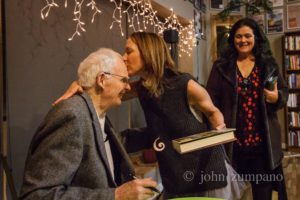 Richard, Lisa Beaudin & Joanne Gardner at his reading for “Anything Goes” at Elk River Books

Long ago, I had the great good fortune to settle in Livingston, quite probably the most important literary community in the country. The town had drawn some extraordinary talents from the literary and entertainment worlds. They collected here in a village with defined boundaries and wilderness in sight, to make magic.

One was Tom McGuane, the ringleader so to speak, who soon was producing comedies of manners that depicted the abrasive and uncomfortable relationship between western traditionalists and hip young people. He went on to write of fishing, horses, and the solace of open country.

With him, the late Jim Harrison arrived to plumb nature and appetites in a series of novels and novellas, as well as some memorable poems. He did not win a Nobel Prize, but those of us who knew him believe the Nobel well represents the stature of his oeuvre. Some of his work is immortalized in film, especially Legends of the Fall.

Another pilgrim was the late Richard Brautigan, troubled poet and novelist, who found solace in this quiet country, at least now and then, and left behind him some memorable literature dealing with his struggle to put his life into a coherent whole.

William Hjortsberg, improbably known as Gatz, arrived here with fine literary and film credentials, which resulted in a string of novels, a great biography, numerous screenplays, and a vast affection for his colleagues in the film and writing worlds. His cinematic novels found a home in Hollywood. He is a master of storytelling, and can dramatize the unexpected.

Peter Bowen, sardonic master of the rural West and a mythical Montana, arrived here and soon was writing a celebrated series of novels that have won him acclaim and honor.

Tim Cahill, journalist specializing in adventure and travel, settled here and wrote for various periodicals including Outside Magazine and The National Geographic. He is recognized as the finest writer in his field, and had created a body of breathtaking narratives of worlds the rest of us can only imagine.

Doug Peacock, wounded by war, found solace in wilderness here, and began to write memorable nonfiction about grizzly bears, the sustaining power of nature, and a world threatened by the reckless genius of the human race. Along with him is his wife Andrea, author of powerful explorations of the toxic world we are creating here in what was once a paradise.

Poetry has bloomed here, not only at the hand of Jim Harrison, but also Marc Beaudin, of Elk River Books; Michael Earl Craig, Montana’s current poet laureate, and Max Hjortsberg. This milieu inspired Russell Chatham and other fine artists to capture Montana and the subtle worlds found on prairie and mountain, in fog and sun and twilight.

Long-form narrative journalism has blossomed here at the hand of Scott McMillion, who took a faltering quarterly published in Bozeman and made a great success of it. Let us include Tom Brokaw here, whose beloved country home lies on the periphery of our Livingston world. Maryanne Vollers has brilliantly contributed biographies of terrible and beautiful people. Novelist Walter Kirn and journalist Amanda Fortini have made their home here.

The arrival of these literary sorts brought with it an influx of film makers and artists including Peter Fonda, Jeff Bridges, Dennis Quaid, Sam Peckinpah, Margot Kidder, Warren Oates, and Michael Keaton.

For every artist named here, there are a dozen more who were drawn to this unique town, and who contribute richly to the magical mix that has made Livingston a capital of American Letters. Here in Livingston, most writers actually earn their living from their work, which cannot be said of any other Montana locale.

Elk River Books has gathered the strands of this unique world and continues to display and sell the genius that has bloomed here. But it has an additional mission now, which is to preserve and enhance and expand the natural world that supports an amazing array of species that are now threatened by development gone berserk. Let us celebrate Elk River’s fifth birthday. It is building upon a literary world that began almost by accident, and is devoted to a great rescue of nature. Elk River Books lies at the heart of the most important literary community in the United States, and it nurtures not only our cultural world, but also the natural one.