Joan Watts on The Collected Letters of Alan Watts 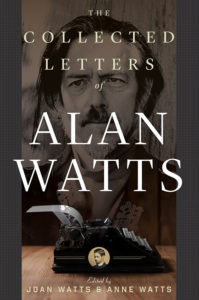 As a philosopher, author and popularizer of Zen Buddhism, Alan Watts became a hero of the counterculture movement of the ‘50s and ‘60s through the publication of more than 50 books including The Wisdom of Insecurity and The Book: On the Taboo Against Knowing Who You Are. On Thursday, December 7, at Elk River Books in Livingston, his daughter Joan Watts will discuss the latest book of his writings, The Collected Letters of Alan Watts.

According to the publisher, The Collected Letters “reveals the remarkable arc of Watts’s colorful and controversial life, from his school days in England to his priesthood in the Anglican Church to his alternative lifestyle and experimentation with LSD in the heyday of the late sixties. His engaging letters cover a vast range of subject matter, with recipients ranging from High Church clergy to high priests of psychedelics, government officials, publishers, critics, family, and fans. They include C. G. Jung, Henry Miller, Gary Snyder, Aldous Huxley, Reinhold Niebuhr, Timothy Leary, Joseph Campbell, and James Hillman. Watts’s letters were curated by two of his daughters, Joan and Anne, who have added rich, behind-the-scenes biographical commentary.”

Joan Watts lives in Livingston, and is an artist with awards from juried exhibitions and a student of sum-i (Japanese ink painting). She also has enjoyed a career as a fundraiser for nonprofit organizations.

Anne Watts, of Santa Rosa, California, is a certified hypnotherapist, educator and counselor. She has facilitated hundreds of workshops throughout the world.

Both daughters attribute their worldviews and life paths to the influences of their father and his teachings.

Pulitzer prize-winning poet Gary Snyder writes, “Alan was always a grand and instructive friend to me. … This collection of letters will entrance and challenge you, and be with you for decades.”