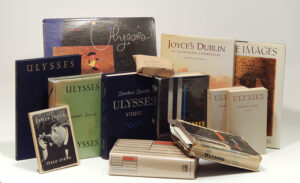 Highlights from the Ulysses Centenary Exhibit
James Joyce’s great modernist novel Ulysses was published 100 years ago, on February 2, 1922. To celebrate, Elk River Books will present an exhibit of collectible editions and related materials drawn from co-owner Marc Beaudin’s extensive James Joyce collection of books and ephemera. The free exhibit, shown at Elk River Books, 122 S. 2nd St. in downtown Livingston, will be on display throughout the month of February.

The novel, a comic and at times surreal reimagining of Homer’s Odyssey, takes place in Dublin, Ireland, on a single day, June 16, 1904. The great warrior Odysseus is rendered as a well-meaning but browbeaten advertising salesman named Leopold Bloom. The book, after being suppressed in the UK and the US (the editors of The Little Review who first serialized chapters of the novel were arrested on obscenity charges), was finally published by Sylvia Beach of the Paris bookstore Shakespeare & Company. Fourteen years later, it took a Supreme Court case to finally legally bring out a US edition in 1934. 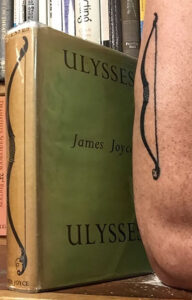 Book designer Eric Gill’s “Homeric Bow” on the Bodley Head edition and Marc’s tattoo.
Among the 14 editions of Ulysses featured in the exhibit are a 2nd printing of the Odyssey Press edition (the first reprint after Shakespeare & Co.’s), a 1st US edition from Random House, a 2nd UK edition from Bodley Head, and copies translated into Russian, Dutch and German. There is even a Manga version that Beaudin admits is “deliciously terrible.”

Other highlights include bookseller catalogs of Ulysses copies from Glenn Horowitz and Gotham Book Mart, an original magazine advertisement for the first US publication, and a bar of lemon soap from Sweny’s Pharmacy, Dublin, which is featured throughout the novel, even becoming a character that sings, “A capital couple are Bloom and I. / He brightens the earth. I polish the sky.”

New copies of Joyce’s masterpiece will be on sale throughout the month at a 10 percent discount: 1 percent for each decade of its literary life.

Beaudin began collecting material related to Joyce and especially to Ulysses after reading the novel 30 years ago. “I was hooked,” he says. “It’s one of the key creative works at the dawn of Modernism, and the more you read it, the more it reveals.” 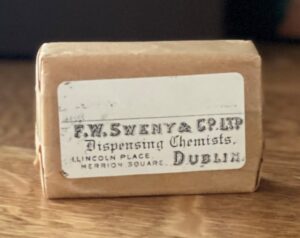 “Mr Bloom raised a cake to his nostrils. Sweet lemony wax.”
Elk River Books, celebrating its 10th anniversary, is a used and antiquarian bookstore specializing in Montana history and literature, outdoor writing, poetry and literary archives. They are Montana’s only members of the Antiquarian Booksellers Association of America. For more information, send an email to info@elkriverbooks.com or call (406) 333-2330.