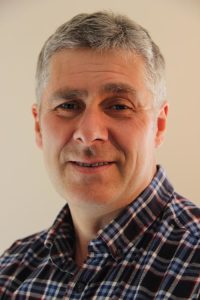 Traveling from his home in the Yorkshire Dales of England, author Mike Sparrow will visit Elk River Books to read from and discuss his historical novel, Native, the first book in his “Manifest Destiny” trilogy, on Thursday, May 10, 2018.

Centering on a traditional Lakota man, a land-hungry Minnesota senator, and the young daughter of Ukrainian immigrants, Native interlaces diverse cultures and personalities while portraying the crimes and brutality of so-called Manifest Destiny.

According to six-time Spur Award-winning author Richard S. Wheeler, “This is historical fiction on a grand scale, written by an author who mastered an epoch. It is an important novel as well as a riveting one.”

A penchant for horseback riding first brought Sparrow to Montana, where he became concerned with the plight of Native Americans. His determination to help led to the writing of Native and the other volumes of his trilogy-in-progress. While he hopes the novels will raise awareness of Native American issues, he is also donating all of his proceeds to One Spirit, a nonprofit organization dedicated to providing for the basic needs of the Lakota Nation and enhancing the cultural life of its youth.