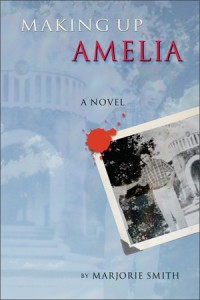 “This isn’t how romantic tropical islands are supposed to be: Two vicious murders, two bodies soaked in blood in two hotel rooms separated by almost 2,000 miles and five decades. A blood-stained photo of Amelia Earhart posing in front of a hospital in Saipan with someone gripping her arm. Trouble is, there’s no evidence that Earhart was ever in Saipan. But if that’s not her in the photo, who is it? And why would someone make it up?”

Smith was raised in Bozeman, but spent seven years in the Mariana Islands where she became fascinated with the missing aviator, and the various theories about what had happened to her. She later spent eight years as a U.S. diplomat stationed in Thailand and Japan, then returned to her home town where she has made her living for the past 30 years as a freelance writer and editor. For 25 years she wrote a regular opinion column for the Bozeman Daily Chronicle.