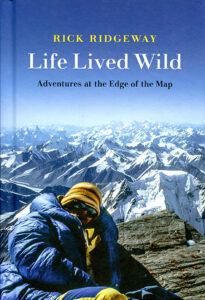 Famed mountaineer and environmentalist Rick Ridgeway will read from and discuss his new book, Life Lived Wild: Adventures at the Edge of the Map, on Friday, Dec. 17, at 7 p.m. at Elk River Books, 122 S. 2nd St. in downtown Livingston. A book signing will follow.

Life Lived Wild brings together Ridgeway’s adventures from around the world including the first traverse of Borneo, the first crossing on foot of a corner of Tibet so remote no outsider had ever seen it, and memories of his friendships with fellow travelers Patagonia founder Yvon Chouinard, North Face founder Doug Tompkins, grizzly bear advocate Doug Peacock and filmmaker Jimmy Chin. In the book, he calculates that he’s spent over five years of his life sleeping in tents: “Small tents pitched in the world’s most remote regions.”

A starred review from Publisher’s Weekly calls the book, “a thrilling account of a life spent exploring the far reaches of the globe.”

Once called “the real Indiana Jones” by Rolling Stone magazine, Ridgeway is recognized as one of the world’s foremost mountaineers. He was part of the 1978 team that were the first Americans to summit K2, the world’s second-highest mountain, and he has climbed new routes and explored little-known regions on six continents. He was honored by National Geographic with their Lifetime Achievement in Adventure Award and was awarded the Lowell Thomas Award by the Explorers’ Club. The author of six books and dozens of magazine articles, he has produced or directed numerous documentary films and serves on the boards of Tompkins Conservation and the Turtle Conservancy. He lives in Ojai, California.