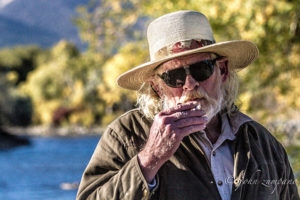 Wherever I travel, I often find myself looking for the same bar. Quiet. Dark but not gloomy. Pool table. Handful of regulars. Absolutely no Fox News on the TV. Preferably Patsy Cline on the jukebox.

In different cities, in different periods of my life, the bar has had several names: Ewald’s in Saginaw, the Old Bar in Bay City, the Black Cat Voodoo Lounge in San Francisco, Palmer’s in Minneapolis, Yogi’s in NYC. Countless others. So, when I first came to Livingston, Montana, nearly 20 years ago, it was only natural that I found the Owl Lounge.

I stepped in, away from the glare of midday light, gave a moment for my eyes to adjust, and saw I was home. The pool table sat silently with the detritus of its last game scattered on its face: Stripes had won soundly. Two guys talking gravely and gravelly at the bar who, judging by how they were dressed, were either ranchers, railroad workers, itinerant miners or Hollywood producers. Dana with his beard, somewhere between Merlin and Santa Claus, served me an Oly.

The only other person there sat alone at a table with an overflowing ashtray and a glass of river-brown whiskey. His stony face and long gray hair gave the impression that he’d just ridden 100 miles by horseback through the worst of an eastern Montana wind. There may have been a small notebook on the table with a pen laid across it, but maybe my imagination has added that detail.

We exchanged greetings and his eyes danced with a blue I would have never expected to co-exist with such a weathered and montane face. They were as if obsidian glass had been forged from mountain bluebirds. It was Peter Bowen.

He asked me to join him. We drank and talked. I bummed one of his cigarettes. It turned out we were both writers, and we talked shop for a while. He, of course, knew my cousin Doug Peacock. In fact, as I write these memories, it occurs to me that I was probably there with Doug, and Doug had made the introduction. But somehow, I came to meet Peter, to be drawn in by his eyes, by his soft voice that seemed to be from another century—a frontier elegance like a cowboy who’d emigrated from a great European city and had come West to find his fortune, but more importantly his freedom. That seems like an important word when considering Peter. He was, more so that the vast majority of people one meets in this life, fully and freely himself. There was no question that Peter Bowen was Peter Bowen, entirely. Most people are only partly themselves and partly who others decide them to be. Peter Bowen had found the freedom and courage to be 100% Peter Bowen. I envy that.

Livingston has a great community of creatives, a loose family of artists in every incarnation of the word: poets, painters, novelists, journalists, photographers, musicians, actors, cooks, naturalists, curators, educators, fly-fishers, bartenders, etc. When one of us dies, we come together in a way I’ve not seen anywhere else I’ve lived. There’s usually an impromptu wake on the day word breaks at Glenn’s bar—one of our bases of operation where the Friday happy hours are a master class in storytelling. Later, the official celebration of a life is held at the Elks Club, where Dana and his legendary beard have re-located to. Our community gathers to mourn and celebrate like crows and elephants do for their departed.

Peter Bowen died on April 8, 2020, during the lockdown due to the Coronavirus pandemic. Glenn’s and the Elks were closed, people were sheltering at home, we couldn’t gather as we would have, as we need to. One of the worst things about this virus, is that in times of trouble our instinct is to come together, yet the virus demands that we disregard our instinct and stay apart. Peter’s death has not been properly honored, his life has not been properly celebrated.

Eventually, we will be able to safely gather. We will have our wake, though not impromptu, at Glenn’s. We will pack the Elks Club to the rafters with the countless people who were lucky enough to call Peter a friend. We’ll share food and stories, raise glasses and our own spirits. … Eventually.

In the meantime, we can revisit Peter’s last book reading at Elk River Books—no doubt his last anywhere. We can hear that voice again, see those cerulean eyes, and enjoy his one-of-a-kind ability to spin a tale. Enjoy.