Doug Peacock’s “Was It Worth It?” 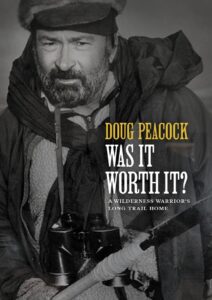 Author, grizzly bear expert and wildlands advocate Doug Peacock will discuss his latest book, Was It Worth It?: A Wilderness Warrior’s Long Trail Home, at Livingston’s Elk River Books, 122 S. 2nd St., on Thursday, Apr. 7, at 7 p.m. Doors will open at 6:30, and a book signing and reception will follow.

Peacock, recently announced as a recipient of the Literature Award from the American Academy of Arts & Letters, is the author of Grizzly Years: In Search of the American Wilderness, Walking It Off: A Veteran’s Chronicle of War and Wilderness and several other books recounting his life-long passion for—and battles to defend—the world’s wildest spaces. A Green Beret medic during two tours in Vietnam and the real-life model for Edward Abbey’s George Washington Hayduke in The Monkey Wrench Gang, Peacock has published widely on wilderness issues: from grizzly bears to buffalo, from the Sierra Madres of the Sonoran Desert to the fjords of British Columbia, from the tigers of Siberia to the blue sheep of Nepal. He is a co-founder of Round River Conservation Studies, which has contributed to the preservation of 20 million acres of wilderness, and of Save the Yellowstone Grizzly, which works to protect and advocate for the bears of the lower 48 states.

In narratives of past adventures from around the world, Was It Worth It? is Peacock’s self-assessment of a live lived in and for the wild. It recounts thrilling journeys seeking tigers in Siberia, jaguars in Belize, and spirit bears in British Columbia, as well as rambles closer to home in Yellowstone National Park, Arizona’s Cabeza Prieta desert, and the braided rivers and wetlands of his Michigan childhood. The book asks the question that, according to the publisher, “many ponder in their twilight years: ‘Was it worth it?’ Peacock challenges readers of all ages to make certain that the answer to the question for their own life it ‘Yes!’”

In a starred review, Publisher’s Weekly called the book “A welcome and worthy addition to the growing canon of environmental literature.”