Montana: Then and Now by Aaron Parrett 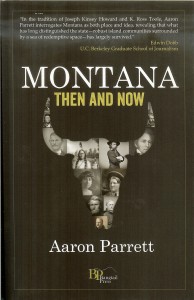 Great Falls author Aaron Parrett will read from and discuss his latest work, Montana: Then and Now, a widely acclaimed account of Montana’s history, at Elk River Books, 120 N. Main St., on Tuesday, June 24 at 7 p.m.

Parrett makes the case in his new book that Montana hasn’t really changed all that much in the last 150 years. Despite the population increase (from 80,000 to nearly one million), he tells the Great Falls Tribune that unlike places in the rest of the country, “it isn’t hard to look around and imagine what it looked like before Europeans and their descendants wrested it from the original inhabitants. One may still float over a hundred miles of the great Missouri River and see the landscape almost exactly as it looked when Lewis and Clark first passed through, or hike in parts of the Bob Marshall Wilderness and see the same scenery that an ancestor of a Blackfoot native saw five thousand years ago.”

Currently a professor of philosophy and literature at the University of Great Falls, Parrett has been published in a range of places, including The Complete Montana Gothic and The Old-Time Herald. A musician-turned-writer, he notes that Montana is far less diverse than it once was: in 1870, nearly one in five Helena residents were Chinese, and far more black people lived here than in surrounding states.

Montana: Then and Now has been roundly praised as entertaining and accessible. Edwin Dobb, of the U.C. Berkeley Graduate School of Journalism, compares Parrett’s work favorably to the classics: “In the tradition of Joseph Kinsey Howard and K. Ross Toole, Aaron Parrett interrogates Montana as both place and idea, revealing that what has long distinguished the state—robust island communities surrounded by a sea of redemptive space—has largely survived.”

Parrett’s reading is free and open to the public. It will be followed by a reception and book signing. For more information, call 333-2330.