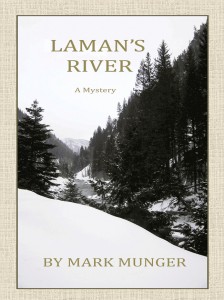 Minnesota author Mark Munger will travel to Livingston to read from his new mystery novel, Laman’s River, on Wednesday, February 20. Following on the heals of his debut mystery, The Legacy, Munger’s sequel continues the saga of his two protagonists, Cook County Sheriff Deb Slater and Lakota FBI Special Agent Herb Whitefeather, who now take up the trail of “a zealous religious serial killer from the wilds of NE Minnesota to the Big Belt Mountains of Montana.”

Raised on the Lake Superior inland seaport of Duluth, Munger draws on his experience as a trial lawyer and district court judge for his mysteries, but has written nine books including five novels, two collections of essays, one biography and one short story collection. He was a finalist and a semifinalist for the 2000 and 2012 Pirate’s Alley Faulkner Writing Award. He set his latest in Montana in part because it’s familiar ground for him:

“My family and I go to Montana to ski,” he told a Minnesota newspaper reporter. “We usually ski Bridger Bowl, Moonlight Basin and Big Sky, areas near Bozeman. When I determined that this story couldn’t take place in northeast Minnesota because a cult (in today’s age of instant information) would have a tough time maintaining secrecy here, I decided to look west. There’s no Mormon compound along the Smith River in central Montana, [b]ut… it could be the site of such a settlement.”

Munger’s reading is free, open to the public, and will be followed by a signing. The event takes place at 7 p.m. at Elk River Books, 115 E. Callender St. in Livingston.