Reading: ‘The Killing of Wolf Number Ten’ by Thomas McNamee 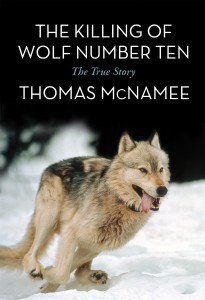 Author Thomas McNamee will read from his latest work of nonfiction, The Killing of Wolf Number Ten, at Elk River Books, 7 p.m. on Tuesday, July 8.

In Killing, McNamee recounts the history of how Yellowstone first exterminated its top predator, then reversed course and re-introduced them to the ecosystem—presented in the context of a murder mystery amid political turmoil.

“Once they were released, two packs remained in the national park, but one bore only one pup and the other none. The other, comprising Wolves Nine and Ten and Nine’s yearling daughter, disappeared. They were in fact heading home. As they emerged from protected federal land, an unemployed ne’er-do-well from Red Lodge, Montana, trained a high-powered rifle on Wolf Number Ten and shot him through the chest.

“Number Nine dug a den next to the body of her mate, and gave birth to eight pups. The story of their rescue and the manhunt for the killer is the heart of The Killing of Wolf Number Ten.”

McNamee’s previous books are far ranging, from biographies of American food pioneers Alice Waters and Craig Claiborne, to fiction, to environmental politics and natural history. He’s the author of The Grizzly Bear, The Return of the Wolf to Yellowstone, A Story of Deep Delight, and Nature First: Keeping Our Wild Places and Wild Creatures Wild. His work has appeared in The New Yorker, Audubon, Natural History, The Washington Post and The New York Times, among other places.

The Boston Globe describes The Return of the Wolf as written in a “straightforward and often sparely poetic voice… a deep-feeling and thoughtful book, steeped in wolf biology but informed by ecology, politics and basic human nature.”

The reading is free and open to the public. It will take place at 7 p.m. at Elk River Books, 120 N. Main St., and will be followed by a signing and reception.