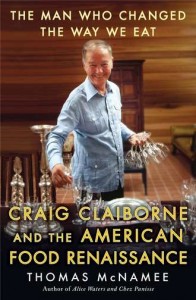 For McNamee, a gourmand and wine aficionado who splits his time between Montana, San Francisco and New York, this book is an encore foray into food writing: his previous biography of Chez Panisse restaurateur Alice Waters documented the origins of the local food movement in America. In his latest, McNamee delves into the often troubled life of a man who—along with Julia Childs and James Beard—turned Americans on to haute cuisine, “creating the template for informed, impassioned food journalism we still recognize today,” according to a review in the New York Times.

McNamee’s other books have been more regional, including The Grizzly Bear (Knopf, 1984),
Nature First: Keeping Our Wild Places and Wild Creatures Wild (Roberts Rinehart, 1987), and The Return of the Wolf to Yellowstone (Henry Holt, 1997). His essays, poems, reporting and reviews have appeared in a wide range of publications. He wrote the PBS documentary Alexander Calder, which won a Peabody Award and an Emmy.

McNamee’s reading is free, open to the public and will be followed by a reception and signing.