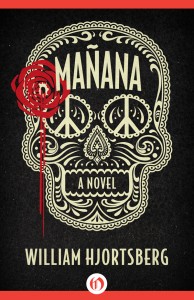 Livingston author William “Gatz” Hjortsberg will read from his first new novel in two decades on Tuesday, June 2, at Elk River Books. Mañana, a thriller set during the 1969 Semana Santa, is “a mind-bending ride through Mexico after the Summer of Love, when an American hippie’s life is upended by a gang of ex-cons.”

Mañana tells the story of the hapless Tod: “All [he] remembers when he wakes up next to a dead prostitute is that he had his first shot of heroin the night before. He and his wife, Linda, were partying with their new neighbors, a trio of parole violators who fled to Mexico after robbing a Beverly Hills jewelry store. Now the place is empty, stripped clean except for Tod’s hunting knife, which is covered in blood. Did he kill the woman, or was he left behind as the fall guy? Convinced that his junkie friends abducted Linda to keep her from talking to the police, Tod buys a gun and prepares to do whatever it takes to get his wife back before he makes a run for the border.”

While Hjortsberg has embraced a diversity of genres in his long career – dabbling in science fiction, the occult, fantasy, screenwriting, biography and an unpublished tome on Norse warriors – Mañana is a return to the noir that made him famous with Falling Angel, the novel that became the 1987 cult classic film Angel Heart starring Mickey Rourke and Lisa Bonet.

A member of the so-called Montana Gang – the group of writers, artists, musicians and filmmakers who hung out in Park County during the 1970s – Hjortsberg chronicled that era in his most recent book, an encyclopedic biography of poet Richard Brautigan titled Jubilee Hitchhiker, a work that was more than two decades in the making.

Hjortsberg’s reading coincides with Elk River Books’ fourth anniversary, and so the free event will include refreshments and door prizes. The festivities will begin at 7 p.m. upstairs at Elk River Books, 120 N. Main St. For more information, call 333-2330.