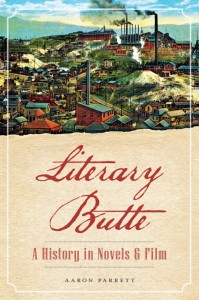 Author Aaron Parrett will sign copies of his new book, Literary Butte: A History in Novels and Film, at Elk River Books during the first Livingston Art Walk of 2015 on Friday, June 26 from 5:30 to 8 p.m.

“Known worldwide as the ‘Richest Hill on Earth,’ Butte, Montana, lured immigrants from every part of the world to sweat in the copper mines that powered America in its Gilded Age. Dozens of writers celebrated this ‘wide-open town’ with impassioned novels of the rugged souls who braved the western frontier at the edge of the Continental Divide. They wrote of the opulence of success and the agony of broken dreams. They catalogued the clash between labor and capital as Butte boomed from a crude village of mules and men to prestige as Montana’s biggest city with towering buildings of brick and iron. In Literary Butte, award-winning author Aaron Parrett surveys the wealth of literature that has come from the town that calls itself ‘Butte, America.’”

Parrett is a musician and writer whose 2014 book, Montana: Now and Then, has been hailed as a classic. A professor of literature and philosophy at the University of Great Falls, Parrett was born in Butte and has lived all over Montana.