Reading: “Things That Are” essays by Amy Leach 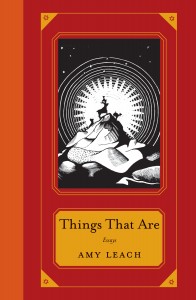 Bozeman author Amy Leach will read from her award-winning collection of essays, Things That Are, at Elk River Books in Livingston on Thursday, September 5 at 7 p.m.

Published by Milkweed Editions, Things That Are is “a series of essays that progress from the tiniest Earth dwellers to far-flung celestial bodies—considering everything from the similarity of gods to donkeys, to the connection of exploding stars and exploding sea cucumbers—to rekindle our communion with the wild world. Concerned at once with realms animal and human, phenomenal and cosmic, the contents expand and confound the reader’s senses in delightful ways.” The essays are accompanied by woodblock-style pen and ink drawings by Minnesota artist Nate Christopherson.

Ms. Leach’s essays have appeared in Tin House, Orion, A Public Space, and the Best American Essays 2009. She is the recipient of a Whiting Writers’ Award, a Rona Jaffe Foundation Writers’ Award, and a Pushcart Prize. Having receiving her MFA from the University of Iowa, Leach taught writing at Loyola and Northwestern Universities in Chicago. She also plays bluegrass, and often incorporates music with her readings.

Kirkus Reviews praises Leach’s writing as “[q]uirky, poetic essays about elements of the natural world … The author’s appreciation for absurdity and the joys of wildlife infuses her pieces with a childlike suspension of disbelief; her descriptions strike a balance between imagination and science, with dashes of magical realism, and some of her wording is far more similar to poetry than prose.”

Leach’s reading is free, open to the public, and will be followed by a signing. The event takes place at Elk River Books, 115 E. Callender St. in Livingston.