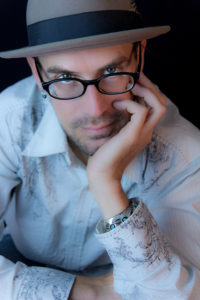 During the past 15 years, Klyma has crisscrossed the country with dozens of national tours while recording eight albums of his blend of Americana, folk, country, rock and storytelling. Originally from Buffalo, NY, he is now based in Boston, and has been a showcase artist at the North Eastern Regional Folk Alliance, as well as a featured artist each year at the Moccasin Creek Festival.

His most recent album, Another Man’s Treasure, debuted at number 20 on the Folk DJ Radio Charts. He’s currently in the final production stages of his ninth album which features performances by Gurf Morlix (guitarist and producer for Lucinda Williams), and Grammy-nominated artist Peter Case.

Sing Out! Magazine notes, “he’s the real deal, singing about stuff that matters,” and the Buffalo News calls him, “a man hell-bent on becoming Buffalo’s own Woody Guthrie.”

In addition to his performance at Elk River Books, Klyma also will meet with students at Park High School to discuss storytelling through music and the poetry of lyrics. This program is made possible by a grant from Humanities Montana.

The free, public event will take place upstairs at Elk River Books, 120 N Main St., in Livingston. Elk River Arts & Lectures is a non-profit organization that seeks to bring writers to Livingston for free public readings, and to provide opportunities for those writers to interact with local public school students. For more information, call 333-2330 or visit elkriverarts.org.