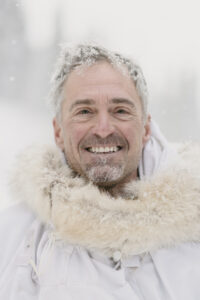 Award-winning Alaskan author Seth Kantner will stop through Livingston on Wednesday, June 29, to read from and discuss his new book, A Thousand Trails Home. Called “[a] stunningly lyrical firsthand account of a life spent hunting, studying, and living alongside caribou, A Thousand Trails Home encompasses the historical past and present day, revealing the fragile intertwined lives of people and animals surviving on an uncertain landscape of cultural and climatic change sweeping the Alaskan Arctic.”

Kantner was born and raised in northern Alaska and has worked as a trapper, wilderness guide, wildlife photographer, gardening teacher, and adjunct professor. His writing has appeared in The New York Times, and Outside, Orion and Smithsonian magazines.

He is most well known as the author of the 2004 novel, Ordinary Wolves, which Publisher’s Weekly called “a tour-de-force” and The Los Angeles Times described as, “[a] rare thing of beauty.” He won the Milkweed National Fiction Prize, the Pacific Northwest Booksellers Association Award, and received a Whiting Award naming him one of the nation’s top ten emerging writers. His other books include the memoir Shopping for Porcupine, and a collection of essays, Swallowed by the Great Land.

Published by the Seattle-based Mountaineer Books, A Thousand Trails is “a critical story about the interconnectedness of the Iñupiat of Northwest Alaska, the Western Arctic Caribou Herd, and the larger Arctic region. … This compelling and complex tale revolves around the politics of caribou, race relations, urban vs. rural demands, subsistence vs. sport hunting, and cultural priorities vs. resource extraction—a story that requires a fearless writer with an honest voice and an open heart.