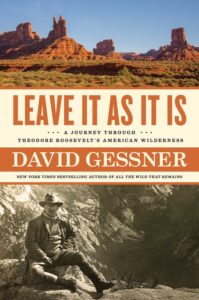 Acclaimed nature writer and New York Times bestselling author David Gessner will present a live-streamed discussion of his latest book, Leave It As It Is: Theodore Roosevelt and the Past, Present and Future of the American Wilderness, on Thursday, Sept. 10 at 7 p.m. The free event will stream on Elk River Books’ Facebook page.

According to the publisher, the book is many things: “a biography of Roosevelt and his relationship to nature, a travelogue winding its way through America’s national parks and wild places, an ode to the restorative power of nature—lyrically conveying the simple importance of watching elk in a field, or a lightning storm roll in—but most importantly, it is a call to action. In this age of political illiberalism and environmental degradation, Leave It As It Is is a devastating look at what we have to lose and what is worth fighting for.”

“Gessner gives us a new Theodore Roosevelt for our times,” says Robert Redford. “As he travels through our national monuments and parks, he considers ways we can make ‘America’s best idea’ even better, uniting the park ideal with the Native ideals behind the creation of Bears Ears National Monument. The book is a thrilling journey in nature, a history of Roosevelt and the Antiquities Act, and a rallying cry in the age of climate change.”

Gessner is the author of 11 books including All the Wild That Remains: Edward Abbey, Wallace Stegner and the American West and The Tarball Chronicles. In 2003, Gessner taught environmental writing as a Briggs-Copeland Lecturer at Harvard, and he now serves as chair of the Creative Writing Department at the University of North Carolina Wilmington, where he is also the founder and editor-in-chief of the literary magazine, Ecotone. He has been awarded a Pushcart Prize, the John Burroughs Award for Best Nature Essay, the Association for Study of Literature and the Environment’s award for best book of creative writing, and the Reed Award for Best Book on the Southern Environment. In 2017 he hosted the National Geographic Explorer show, “The Call of the Wild.”

To view the event, navigate to Facebook.com/ElkRiverBooks at 7 p.m. on June 10. You do not have to have a Facebook account in order to watch.

Leave It As It Is will be available for purchase online from Elk River Books before, during and after the event at shop.elkriverbooks.com. Gessner will sign copies for those readers who desire it, and Elk River will provide both pickup and delivery options.