Reading: All the Wild that Remains 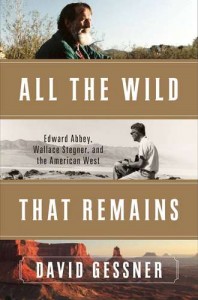 Award-winning author David Gessner will travel to Livingston to read from and talk about his new book, All the Wild that Remains: Edward Abbey, Wallace Stegner and the American West, on Tuesday, July 21, at Elk River Books.

“Archetypal wild man Edward Abbey and proper, dedicated Wallace Stegner left their footprints all over the western landscape. Now, award-winning nature writer David Gessner follows the ghosts of these two remarkable writer-environmentalists from Stegner’s birthplace in Saskatchewan to the site of Abbey’s pilgrimages to Arches National Park in Utah, braiding their stories and asking how they speak to the lives of all those who care about the West.”

A professor of environmental writing at the University of North Carolina in Wilmington, Gessner’s work melds investigative journalism with memoir and a passion for wilderness. His book, The Tarball Chronicles, delves into the devastation wreaked by the BP gulf oil spill. Return of the Osprey is a tribute to this once-endangered species. For his latest book, Gessner travelled through Park County in the summer of 2012 to interview Abbey’s good friend and iconic character Doug Peacock. “I was nervous about meeting Doug Peacock,” he writes. “I didn’t have many living heroes left; Peacock was one.” What emerges from that interview, and as well defines the rest of the book, is a nuanced portrayal that resists easy characterization.

Gessner has won a slough of awards for his writing, including a Pushcart Prize, the John Burroughs Award for best nature writing and the 2012 Reed Award for best book on the Southern environment. His articles and essays have been published widely, from Outside magazine to the New York Times, and he founded the award-winning literary journal, Ecotone.

Reviewers have lined up to praise All the Wild that Remains. The Christian Science Monitor named it their number one book for April, and Powell’s Books made it a staff pick. Pam Houston writes, “Praise David Gessner for reminding us of the words of our two most venerated literary grandfathers of the American West, reminding us of our wilder longings, to incite in us a fury, that we might act – even now – to defend all the wild that remains.”