Joe Fitschen on the pioneers of American climbing 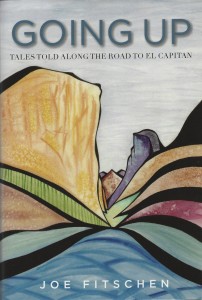 Bronx author Joe Fitschen will read from his collection of stories, Going Up: Tales Told Along the Road to El Capitan, on Saturday, March 9 at Elk River Books in Livingston.

“The core of Going Up is a collection of stories about those California rock climbers in the 1950s who took to the big walls of Yosemite Valley,” Fitschen says. “We were a very small group, fewer than twenty young men, who also pioneered climbs at Tahquitz Rock, the southwest desert, the Tetons and Canada.” The stories feature such legends as Patagonia founder Yvon Chouinard, Irene Beardsley (part of the first all-woman team to climb the North Face of the Grand Teton, and of the first American ascent in 1978 of Annapurna), climbing equipment pioneer Tom Frost, and Harry Daley (whose eponymous route up the Monday Morning Slab remains a classic for Yosemite climbers), among many others.

Fitschen, who grew up in Southern California, is credited (by Joseph Taylor in his book, Pilgrims of the Vertical), with helping to bring a literary aesthetic to the 1960s-era climbing magazine, Ascent, which he co-edited for its first two years. Ascent, he explains, evolved from the Sierra Club Bulletin when that group shifted its focus from mountaineering to conservation. He has worked as a skiing instructor, climbing guide, and a teacher at Lassen College, and his poetry has been published in numerous “little magazines.”

Malcom Margolin, publisher of Heyday Books, praises Fitschen’s debut work as “excellent, literary in the best sense of the word. It’s surprising, stylistically courageous, discursive, self-assured, engaging and generous in both substance and tone… It gets the ‘business’ of describing early climbers and climbing done with competence, but it does much more, giving context, reflection, nuance, and personal dimension to the climbing world of the ‘50s.”

Fitschen’s reading is free, open to the public, and will be followed by a signing. The event takes place at 2 p.m. at Elk River Books, 115 E. Callender St. in Livingston.