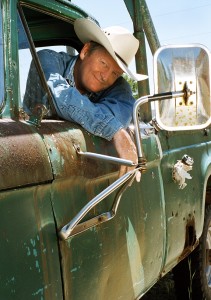 Best-selling author Craig Johnson will stop by Elk River Books during the lunch hour on Monday, June 15, to sign copies of his new book, Dry Bones.

Johnson, who lives in Ucross, Wyoming (pop. 25), has set his series featuring the laconic sheriff Walt Longmire in Absaroka County, where reservation life and landscape are as vital characters as the well-crafted two-leggeds. Johnson once described Longmire to the New York Times as “the sadder-but-wiser” hero: “The guys who are 6 feet 2 inches of twisted steel and sex appeal – every woman wants him, every man fears him – that’s not him.” Mr. Johnson’s books have been turned into a popular TV series called Longmire, which was picked up by Netflix for its fourth season, currently in production. 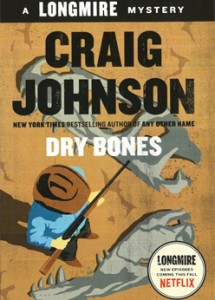 In Johnson’s latest book, a near-complete Tyrannosaurus rex skeleton “appears to be a windfall for the High Plains Dinosaur Museum – until Danny Lone Elk, the Cheyenne rancher on whose property the remains were discovered, turns up dead, floating face down in a turtle pond. With millions of dollars at stake, a number of groups step forward to claim her, including Danny’s family, the tribe, and the federal government. As Wyoming’s Acting Deputy Attorney and a cadre of FBI officers descend on the town, Walt is determined to find out who would benefit from Danny’s death, enlisting old friends Lucian Connolly and Omar Rhoades, along with Dog and best friend Henry Standing Bear, to trawl the vast Lone Elk ranch looking for answers to a sixty-five million year old cold case that’s heating up fast.”

Two of Johnson’s books, The Cold Dish and The Dark Horse, were Dilys Award finalists, and Death Without Company was named the Wyoming Historical Association’s Book of the Year. Another Man’s Moccasins received the Western Writer’s of America Spur Award for best novel of 2008 as well as the Mountains and Plains award for fiction book of the year.

The event is free, begins at noon, and will last until Mr. Johnson gets bored or we run out of books. For more information, call 333-2330.