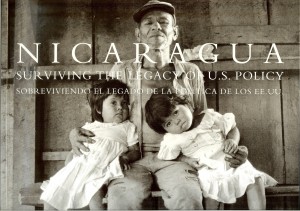 Livingston photographer Paul Dix will sign copies of his book, Nicaragua: Surviving the Legacy of U.S. Policy, (co-authored with Pamela Fitzpatrick) at Elk River Books during the Art Walk from 5 to 7 p.m. on Friday, June 22.

Dix has spent much of his career documenting “people and the impact of wars and poverty,” with a particular focus on the U.S.-sponsored Contra War in Nicaragua where he worked on staff for Witness for Peace from 1985 though 1990. He’s worked as a photographer for the U.S. Naval Oceanograophic Office and the Environmental Protection Agency among other agencies. His photos have been published by Time magazine, Reader’s Digest and Rolling Stone.

In his book, Dix returns to Nicaragua to meet with about 100 people chosen out of the thousands he photographed during the war, shares the earlier photos, takes new ones and listens to their stories. The New York Review of Books calls Nicaragua “an extraordinary book of stunning black and white images of the men and boys, women and girls, who lost limbs and loved ones and managed to pick up the pieces of their lives and move on after 10 years of devastating conflict.”