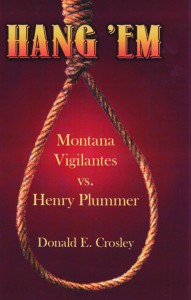 The Montana Standard praises Crosley’s debut book—a work of nonfiction—as being “written as if Crosley were telling you a story. It talks about the throngs of newcomers who came to the Wild West and found gold. These honest seekers of wealth were soon robbed, pillaged and killed by gold field drifters and thieves. A corrupt sheriff, with his dirty deputies and gang of robbers, killers and cattle rustlers, making the honest miner’s struggle, in a lawless gold country, far too dangerous; They needed help. They decided to unite and fight, and formed the Montana Vigilantes. Their motto: ‘Hang ’em,’ thus the title of Crosley’s book.”

Copies of Hang ‘Em will be available for purchase at the signing, which is open to the public. For more information, call 333-2330.