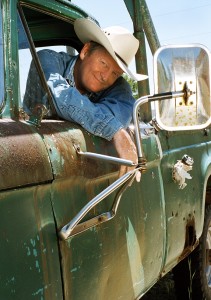 Wyoming author Craig Johnson will stop by Elk River Books, 115 E. Callender St., to sign copies of his new book, As the Crow Flies (Viking, 2012) over the lunch hour on Tuesday, June 12.

Johnson, who lives in Ucross, Wyoming (pop. 25), has set his series featuring the laconic sheriff Walt Longmire in Absaroka County, where reservation life and landscape are as vital characters as the well-crafted two-leggeds. Johnson once described Longmire to the New York Times as a “the sadder-but-wiser” hero: “The guys who are 6 feet 2 inches of twisted steel and sex appeal — every woman wants him, every man fears him — that’s not him.”

In his latest book, Longmire’s daughter Cady (modeled, Johnson says, on a young woman from a Livingston family) takes center stage as her wedding plans are derailed by murder. “Walt and old friend Henry Standing Bear are the de facto wedding planners and fear Cady’s wrath when the wedding locale arrangements go up in smoke two weeks before the big event.

“The pair set out to find a new site for the nuptials on the Cheyenne Reservation, but their scouting expedition ends in horror as they witness a young Crow woman plummeting from Painted Warrior’s majestic cliffs. It’s not Walt’s turf, but the newly appointed tribal police chief and Iraqi war veteran, the beautiful Lolo Long, shanghais him into helping with the investigation.”

Two of Johnson’s books, The Cold Dish and The Dark Horse, were Dilys Award finalists, and Death Without Company was named the Wyoming Historical Association’s Book of the Year. Another Man’s Moccasins received the Western Writer’s of America Spur Award for best novel of 2008 as well as the Mountains and Plains award for fiction book of the year.

Mr. Johnson’s books have recently been turned into a TV series on the A&E channel called Longmire, which debuts on Sunday, June 3 at 8 p.m. The event is free, begins at noon, and will last til Mr. Johnson gets bored or we run out of books. For more information, call 224-5802.