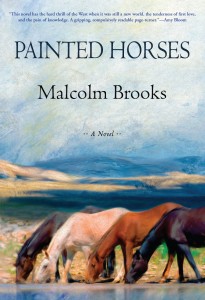 Painted Horses is being received with great critical acclaim. It tells the story of a young woman archaeologist in 1950s Montana: “Reminiscent of the work of Wallace Stegner, Thomas McGuane, and Annie Proulx, Painted Horses sends a dauntless young woman on a heroic quest, sings a love song to the horseman’s vanishing way of life, and reminds us that love and ambition, tradition and the future often make strange bedfellows. It establishes Malcolm Brooks as an extraordinary new talent.”

Stephen Bodio writes that Painted Horses “will draw you in and leave you dreaming. I have rarely read a novel that realized a world so well.” Rick Bass likens Brooks’ writing to “the fiery, lyrical and animated spirit of Cormac McCarthy’s Borderlands trilogy, and the wisdom and elegance of Wallace Stegner’s Angle of Repose, Painted Horses is its own work, a big, old-fashioned and important novel.”

Brooks is a carpenter by trade, who has been published in Big Sky Journal, Montana Quarterly and Outside magazine, among others. He’s also worked as a writer and technical advisor on outdoor TV shows including LL Bean Guide To The Outdoors, Bird Hunter’s Journal, and Ducks Unlimited Television.

His reading is free and open to the public, and will be followed by a reception and book signing. For more information, call 333-2330.