Book of the Month – Catcher in the Rye 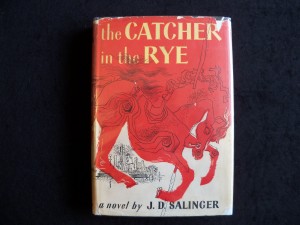 This month we feature a beautiful edition of a perennial classic, J.D. Salinger’s Catcher in the Rye — the book that inspired countless writers of anti-hero, youth angst novels, everything from The Bell Jar to Less than Zero (and, of course, CIA-programmed assassins). You probably read it when you were about Holden’s age, if not, read it now. Beyond the hype and conspiracy theories, it’s a great read. One of the most read and most censored books in America, and we have a truly special copy waiting for the right owner.

“It was that kind of a crazy afternoon, terrifically cold, and no sun out or anything, and you felt like you were disappearing every time you crossed a road.” 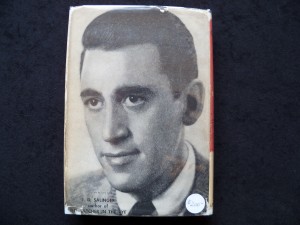 “My brother Allie had this left-handed fielder’s mitt. He was left-handed. The thing that was descriptive about it, though, was that he had poems written all over the fingers and the pocket and everywhere. In green ink. He wrote them on it so that he’d have something to read when he was in the field and nobody was up at bat. He’s dead now. He got leukemia and died when we were up in Maine, on July 18, 1946. You’d have liked him.”

This is a book to be savored. Treasured and re-read. And if you’re one of the millions of Salinger fans out there, this copy just might be the perfect addition to your library.

“What really knocks me out is a book that, when you’re all done reading it, you wish the author that wrote it was a terrific friend of yours and you could call him up on the phone whenever you felt like it. That doesn’t happen much, though.”