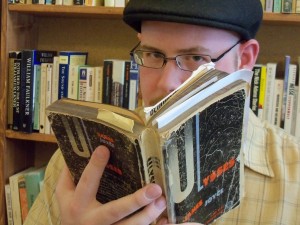 Bret Kinslow prepares for the role of Stephen Dedalus in Nighttown Suidae, based on an excerpt of James Joyce's Ulysses.

James Joyce fans the world over mark each June 16 as “Bloomsday,” honoring the day the groundbreaking novel Ulysses takes place, chronicling the Dublin-wide odyssey of its central character, Leopold Bloom. Livingston’s Elk River Books joins the celebration with a performance of live theatre and music at the Livingston Bar & Grille, 130 N. Main, on Sunday, June 16, at 7 p.m. Admission is free.

The evening begins with a performance of a completely revised, more-rollicking version of Nighttown Suidae, Marc Beaudin’s adaption from the novel. The comedic play comes from the “Circe” episode of Ulysses, where Bloom follows Stephen Dedalus and his drinking companion, Lynch, to Dublin’s red light district. It’s a hallucinatory, hilarious, and surreal revelry of poetic language and wild imagery. The reading runs roughly 40 minutes and contains adult language and sexual references.

“Last year’s debut was such a hit,” says Beaudin, “we’ve decided to make it an annual tradition, this time with audience participation. Joyce’s stream-of-consciousness, highly imaginary writing includes dialogue spoken by everything from a bar of soap to the springs of a prostitute’s bed: these are a couple of the roles that will be performed by the audience.

“We hope to see this growing into a sort of Rocky Horror for the literary-minded.”

The play will be followed with a concert by Livingston’s Fenian Brew, performing Irish music from the traditional to The Pogues and beyond.

Elk River Books frequently presents readings, book signings and other literary events, and carries a curated collection of used books, new books by regional writers (with many signed editions), as well as a selection of cards by local artists and fair trade gifts. The store is located at 115 E. Callender St. in downtown Livingston, and can be found online at elkriverbooks.com. For more information, call 224-5802.