An Evening with Mary Clearman Blew 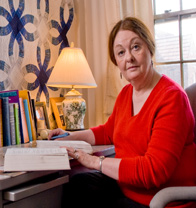 Blew is a Montana literary legend whose memoir of growing up on a ranch near Lewistown, All But the Waltz, shares a historical tradition with the nonfiction works of Ivan Doig, Judy Blunt and Joe Wilkins.

According to her biography, “Mary Clearman Blew ran out of money and left the University of Montana after her junior year to teach fifth and sixth graders in Winnett, Montana, population 300, before returning for her B.A. and M.A. degrees. Her fiction collection, Runaway, won a Pacific Northwest Booksellers Award, as did her memoir All But the Waltz: Essays on a Montana Family. Her short fiction has appeared in the O. Henry Prize Collection and Best American Short Stories. A novel, Jackalope Dreams, won the 2008 Western Heritage Award. Other awards include the Western Literature Association’s Lifetime Achievement Award, [as well as the Mahan Award for contributions to Montana literature, the Idaho Humanities Council’s 2001 Award for Outstanding Achievement in the Humanities, and a Handcart Award for Biography. Her most recent book is This Is Not the Ivy League: a Memoir. She teaches creative writing at the University of Idaho and at Pacific Lutheran University.”

The New York Times praised This is Not the Ivy League for its “unflinching self-scrutiny,” describing it as a complicated “anti-memoir” in which Blew struggles to bridge the gap between her younger and wiser selves. Kirkus Reviews calls it “a fierce and unsentimental book that stands eloquent testament to the high price that women of a certain generation had to pay to pursue their dreams.”

Blew will visit with Park High School students on Thursday, October 2, then give a public reading that evening upstairs at Elk River Books,120 N. Main St. at 7 p.m. The reading is free, and will be followed by a reception and signing. The events are co-sponsored by the Murray Hotel and Elk River Books.

Elk River Arts & Lectures is a non-profit (501c3 status pending) organization that seeks to bring writers to Livingston for free public readings, and also to provide opportunities for those writers to interact with local public school students. ERAL is currently in the midst of a Kickstarter campaign to fund its 2014-2015 season. More details are available at http://www.elkriverarts.org.