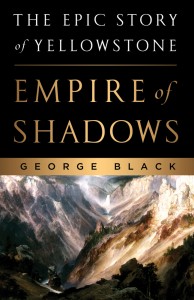 Journalist George Black travels to Livingston on Tuesday, September 11, at 7 p.m. to read from his book, Empire of Shadows: The Epic Story of Yellowstone at Elk River Books, 115 E. Callender St.

“Empire of Shadows is the epic story of the conquest of Yellowstone, a landscape uninhabited, inaccessible and shrouded in myth in the aftermath of the Civil War. In a radical reinterpretation of the nineteenth century West, George Black casts Yellowstone’s creation as the culmination of three interwoven strands of history – the passion for exploration, the violence of the Indian Wars and the ‘civilizing’ of the frontier – and charts its course through the lives of those who sought to lay bare its mysteries.”

Kirkus Reviews states that “[t]he story of a national park might seem a niche subject, but OnEarth magazine editor Black … surrounds it with a colorful, stormy, often-distressing history of our northern mountain states.” Robert Utley, former Chief Historian for the National Park Service, praises Empire of Shadows as “an engrossing chronicle of the vast sweep of Western American history that, after six decades, finally closed in on our first national park.”

Mr. Black’s work has taken him to five continents, where he has reported on subjects ranging from the democracy movement in China to civil war in Central America. He is the author of The Trout Pool Paradox and Casting a Spell, and the editor of OnEarth, the magazine of the Natural Resources Defense Council.

Mr. Black’s reading is free, open to the public, and will be followed by a signing.