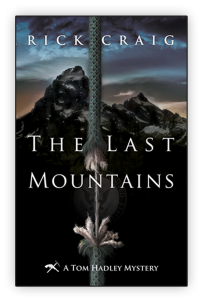 Missoula author Rick Craig will visit Elk River Books on Friday, September 23 at 7:00 pm for a reading and signing of his debut novel The Last Mountains.

Rick Craig’s short stories have appeared in numerous literary journals and have won a Fiction Fellowship from Writers@Work and the Chicago Tribune’s Nelson Algren Award. Rick spent twelve years teaching kayaking, mountaineering and other backcountry travel skills around the Western US, as well as in Mexico, Alaska, Chile and East Africa.   The Last Mountains, which begins a mystery series featuring Park Service climbing ranger Tom Hadley, is his first novel.

From the official website: “When Park Service climbing ranger Tom Hadley finds a fallen climber’s body on the Grand Teton, he believes his troubled eleven-year-old son has caused a terrible accident. But evidence of murder plunges the father and son into a mystery they must solve together to salvage their fragile relationship.

“All Tom wants from the summer of 2002 is to become a better father and reassemble the life that fell apart when a brain injury ended his promising Himalayan mountaineering career.  But the murder pulls him into a web of terrorists, American agents and political intrigue. Tom foils an assassination attempt on the Vice President, but in a world where not all is as it seems, it may be his son—the only one who can identify the killer from the mountain—who is really in danger.