ArtWalk Feature – James Crissman, author of Root Cause: The Story of a Food Fight Fugitive 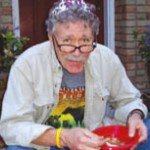 Join us for a reading and signing by novelist and poet James Crissman. Visiting from Michigan, Crissman is one of the original “Saganistas” – the name dubbed by Detroit poet M.L. Liebler for the Saginaw poetry scene of the mid-90s which included the late Al Hellus, Marc Beaudin, Monica Rico and others. With Root Cause, the poet Crissman has successfully ventured into the realm of novelist. 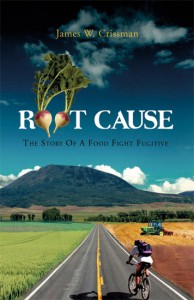 When Bruce Dinkle becomes obsessed with eating only local food, his zeal badly exceeds his judgment. After alienating his family by enforcing a strict locavore and urban agriculturist lifestyle, he abandons them by bicycle on a quixotic quest to learn where food comes from. He quickly becomes enmeshed in a small Michigan farming community where he goes to work for a large crop farmer, meets a sagacious veterinarian, and falls for a randy goat lady—all part of a sprawling cast of characters who enliven this often hilarious, mix of food, family, sex, and a little violence down on the farm. Think Michael Pollan meets James Herriot and Carl Hiaasen.

James W. Crissman is a veterinary pathologist and former large animal veterinarian. He is the author of a 1998 Pudding House Publications chapbook, Jailbait in Holy Water, and has won numerous prizes for his poetry. His short story, “Wallhangers,” won the 2007 Dirt Rag literature contest. Root Cause: the Story of a Food Fight Fugitive is his first novel. Jim and his veterinarian wife Jill live on a small farm in central Michigan where they’ve grown three children and much of their food for more than twenty years.

For more on Root Cause and its author, please visit www.jameswcrissman.com